When you have several often used measurement setups, an easy and convenient way to handle these is to store them as user presets. A user preset contains instrument settings, software desktop settings like which I/Os are used and what is being shown in the graph(s), etc. and measured data.

A user preset is stored with the software and is then accessible via a User preset button on the preset toolbar.

Buttons that have a user preset assigned, are enabled and show a colored icon:

Buttons that do not have a user preset assigned, are grayed, showing a gray icon:

To create a user preset, you first have to setup the software and instrument for the specific measurement application. Once the setup is ready, you can create the user preset by pressing the Ctrl key and clicking one of the user preset buttons.

When a button is clicked that already has a preset assigned, the software will ask for a confirmation if the existing user preset can be overwritten. 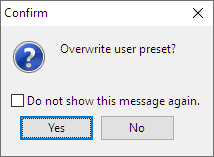 To load a specific user preset, all that needs to be done is clicking the corresponding button. All settings will be loaded from the user preset and measuring with that setting can immediately start.

When a preset is no longer required, the preset location can be cleared. To clear a user preset, press the Ctrl and Shift key together and click the preset button of the user preset to clear. A confirmation dialog will be shown: 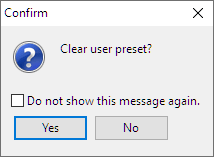 To give a user preset a title, press the Alt key and click the corresponding user preset button. A dialog to enter a name for the user preset is shown.

To clear an existing name for a user preset, empty the edit box and click the OK button.

Worksets button and select Add workset ... from the menu that pops up. A dialog is then shown in which the name for the workset can be entered. When an existing workset name is entered, a warning is displayed and a new name can be entered.

Worksets are stored on disk, in separate directories for each workset. The name of the workset is used as directory name. When this directory for the workset can not be made, a warning is given.

After creating the new workset, it is also set as active workset. The new workset is empty, it can now filled with new user presets.

When more than one workset is available, a specific workset can be selected by clicking the

Worksets button and selecting the required workset from the menu that pops up. The user presets toolbar will now be filled with buttons for the presets in the workset. When a user preset will be created, modified or cleared, it will be done in the selected workset.

When a workset is no longer required, it can be removed from the software. Click the

Worksets button and select Remove worksets ... from the menu that pops up. That opens a dialog where all worksets can be selected to be removed.