TiePie's CDS technology internally uses a low-jitter temperature compensated clock, capable of synthesizing any frequency, to linearly drive data from the waveform memory to a digital-to-analog converter (DAC) creating the analog signal. Because no memory values are skipped or repeated and each value is output for the same amount of time, the result is an optimal true form point-by-point arbitrary waveform.

The CDS technology used in the WiFiScope WS5 and Handyscope HS5 Arbitrary waveform generator is superior to traditional Direct Digital Synthesis (DDS) which has been applied in the recent decades. DDS has many drawbacks, such as high jitter when generating low frequency signals and a high Total Harmonic Distortion (THD). CDS eliminates these drawbacks and gives every engineer access to an Arbitrary waveform generator with characteristics previously unaffordable. 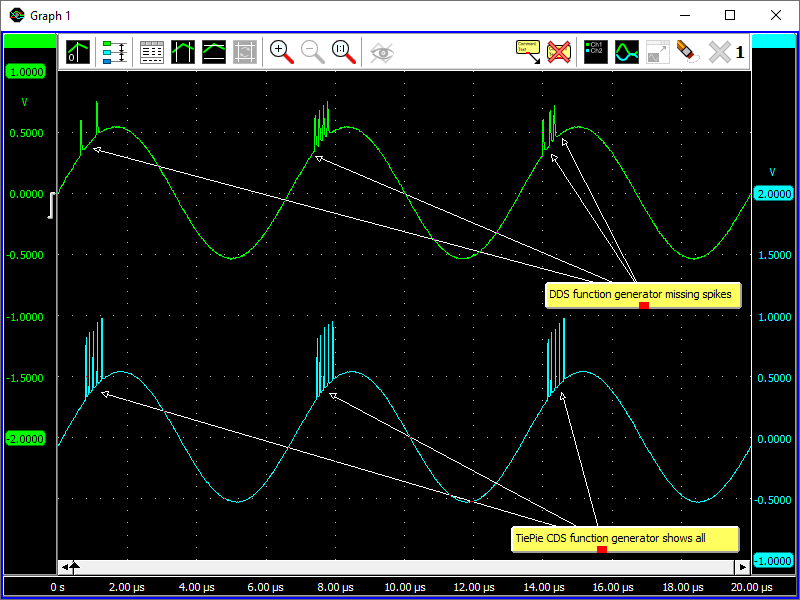 The WiFiScope WS5 and Handyscope HS5 CDS technology shares all performance advantages of DDS, while adding the following significant advantages:

Since the WiFiScope WS5 and Handyscope HS5 equipped with CDS technology use every point in waveform memory and no points are skipped or repeated, arbitrary waveforms are reproduced much more accurately. This results in an extremely low Total Harmonic Distortion (THD) as illustrated in figure 3, which shows a spectrum of a generated 50 kHz sine wave. The TiePie CDS technology is superior to the old DDS which has some serious drawbacks with respect to jitter and distortion. Starting with the TiePie Handyscope HS5 and followed by the WiFiScope WS5 combining an oscilloscope and Arbitrary waveform generator, TiePie engineering is using CDS technology to maintain all performance advantages of DDS while eliminating its disadvantages. Each point in waveform memory is used, and used only once, to produce a true form waveform, which means waveforms are reproduced with higher fidelity. Jitter and distortion are significantly reduced. Being such an innovative and advanced technology, CDS gives the function/arbitrary waveform generator industry a new impulse for now and many years to come.