The Handyscope HS5 and Handyscope HS3 Arbitrary Waveform Generators can be controlled with the Arbitrary waveform generator control window, which is shown in figure 1. 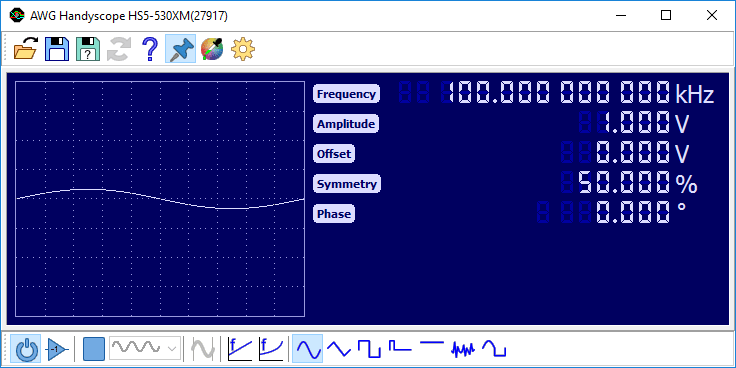 on the main toolbar in the application, or by double clicking the function generator in the Object tree.

The Arbitrary waveform generator control window has two fully configurable toolbars. The toolbars can be populated with buttons for easy access to frequently used functions and signal settings:

Depending on the selected signal type and generator mode, various signal properties like frequency or amplitude can be set. To adjust a signal property, the label with the name of the property can be clicked. This opens a dialog in which the requested value can be entered. This dialog accepts prefixes like u, m, k, M, etc.

The output invert option is used to invert the generated signal pattern. The signal is inverted around the selected offset level. Use it e.g. to create pulse signals with a negative pulse.

The following generator modes are supported:

Note that the EXT2 input is active by default, unless pulled down.

Generator mode can only be set when the generator is stopped.

When an arbitrary signal is selected, the frequency mode of the Arbitrary waveform generator can be set. The following frequency modes are supported:

The sweep function enables a linear or logarithmic continuous sweep with the selected signal type (sine, triangle or square). The sweep runs from Frequency1 to Frequency2, where Frequency1 is allowed to be higher than Frequency2. Optionally, the sweep can start at a different frequency than Frequency1 by setting the Start Frequency to a value between the two sweep frequencies. Duration determines the sweep duration. 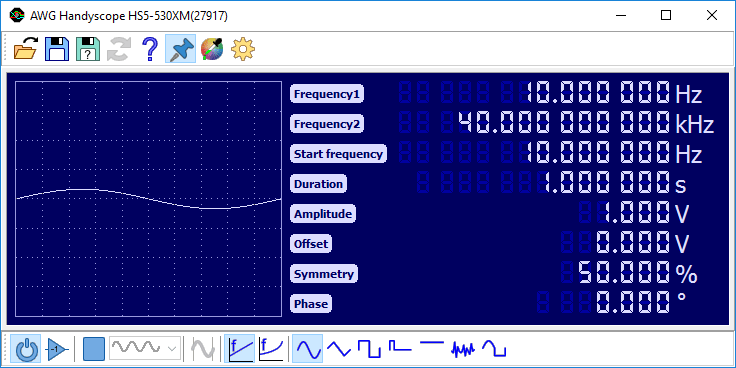 The accuracy of the sweep is determined by sweep settings in the settings dialog. The minimum and maximum number of samples that are used for one period of the signal can be set, as well as the maximum amount of samples for the complete sweep. Higher values will give a more accurate sweep, but changes to sweep properties will take a bit longer to take effect.

Sweep is only available on Handyscope HS5 models with extended memory option XM.

All settings and arbitrary data of the Arbitrary waveform generator can be saved in setfiles with the "Save" and "Save as" buttons on the toolbar or with hotkey Ctrl + S.

Setfiles can be loaded with the "Load" or "Reload" toolbar button, with hotkey Ctrl + O or by dragging a setfile onto the Arbitrary waveform generator control window.

Besides some standard signals, the Arbitrary Waveform Generator can output arbitrary data. There are different ways of loading such data into the generator. Data can be loaded directly from an open source in the software, or from a file.

From a TiePie engineering TPS file, data can be read from each Arbitrary waveform generator or Source chunk in the file.

From a TiePie engineering WinSoft DAT file, data will be read from the first channel in the file.

Data from Wave audio files can also be read into the Arbitrary waveform generator. If more than 1 channel is available in the file, only the first channel will be read. All uncompressed Wave audio files with a resolution of 8, 16, 32 or 64 bit are supported.

A trick to load ASCII data

You can create ASCII files that look like WinSoft .DAT files to be able to load your data into the function generator's memory. These files contain a header line and next various lines with measuremnt data, one sample moment per line, one column per channel. The first two columns contain sample number and relative time to the trigger point. The next columns contain the sample values, given in Volt. The columns sepatator must be a comma. The decimal separator in the voltage values must be a dot.

Because the function generator only loads the data of channel 1, only the third column is needed in the file. You may create a file with .DAT extension and contents looking like this:

This file contains 4 lines of voltage values, but the file may contain any number of data lines.

The Arbitrary waveform generator can be controlled with several hotkeys, see the hotkey page for a complete list.

The Arbitrary waveform generator in the Handyscope HS5 and Handyscope HS3 has three trigger output signals which are internally connected to the trigger system of the oscilloscope part of the instrument. In the oscilloscope they can be used as trigger source, to provide an exact synchronization between signal generation and measuring. The available trigger signals are: